"How to make money online" or "How to start an online business" are still some of the most popular Google searches. After all, who doesn't want to escape the rat race and become your own boss and start earning a decent income from the comfort of your own home.

I know I certainly do!​

I have been chasing this dream since 1999 when I first tried to become my own boss by buying a franchise in a web development company. After about 4 months the company went bust and £6000 of my hard earned cash went up in smoke!

Since then I have dabbled in a variety of other online ventures and spent several more thousands on a variety of courses and "surefire business opportunities" but none of them worked out for me.

I first heard of Rob Cornish a few years ago and joined his mailing list after being impressed by some of the content he was giving away for free on his blog.

​A few months ago I bought a cheap product made by Rob called Evergreen Passive Income which was an affiliate marketing course. I had a query about it so sent Rob an email. I was hoping for an email reply at some stage over the course of the next few days.

However instead of just hitting the reply button and sending me a few lines of text he did something that totally blew me away. He sent me a personal video message!

​The video was packed full of personalised help and advice and pointers to other training videos he has that I could access free of charge.

This is typical of Rob Cornish in my experience to date. He is by far the most helpful Internet Marketer I have ever experienced.

I was so​ impressed by Rob that I decided to take a trial subscription to his Gain Higher Ground Membership site and I have to say it is the best money I have ever spent.

The members area is absolutely packed with training videos that cover every possible topic for anyone who has ever wanted to start their own online business​. Let's take a look at what's there:

​The website is incredibly easy to navigate with all the various sections laid out down the left hand side. Have a look at the picture above.

The Let's Get Started section eases you gently in and gives you a flavour of what to expect as a rookie internet marketer​. That's not to say that people with some experience wont benefit from this too.

The next section is called 15 steps to Success and this is the first big eye-opener for most members. In this section Rob takes you through step by step, the process for building your first website with wordpress. Each of the 15 videos show you exactly what do do and exactly where to click to get things to work.

You are currently looking at the very website I built in 15 steps to success. OK its not going to rival Amazon or Wikipaedia but for someone who had never built a web page before - i think its not bad.

The profitable niches section shows you exactly how to go about finding the right niche to build your business around. 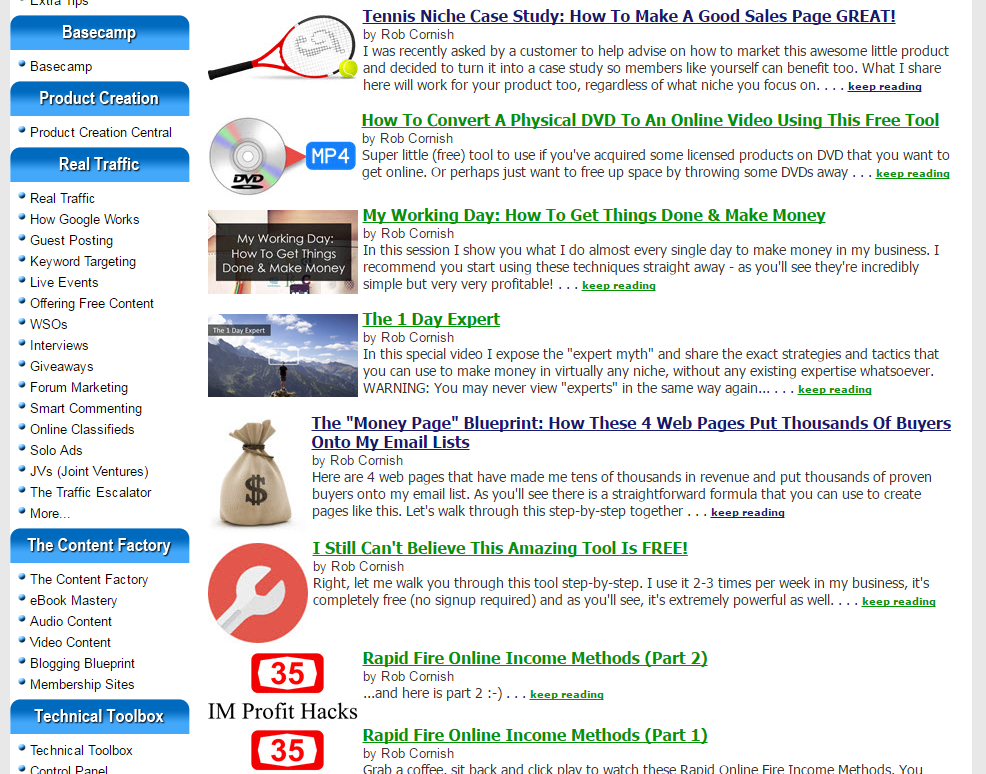 ​Basecaqmp is a collection of training videos that Rob has put together over many years. Take a look at some of the topics in the picture to get some idea of just how valuable this content is!

Product Creation - as the name suggests - shows you how to create your own products, including ebooks, videos, audio, and software products

Real Traffic shows you exactly what traffic methods work. We all know traffic is the lifeblood of an online business so this section is a goldmine

The content factory can be used alongside product creation and shows you just how to put together content for use in your business.

There are literally hundreds of hours of power-packed training inside Gain Higher Ground Membership - here's a quick shot of one where Rob shows you how to find images for your business: 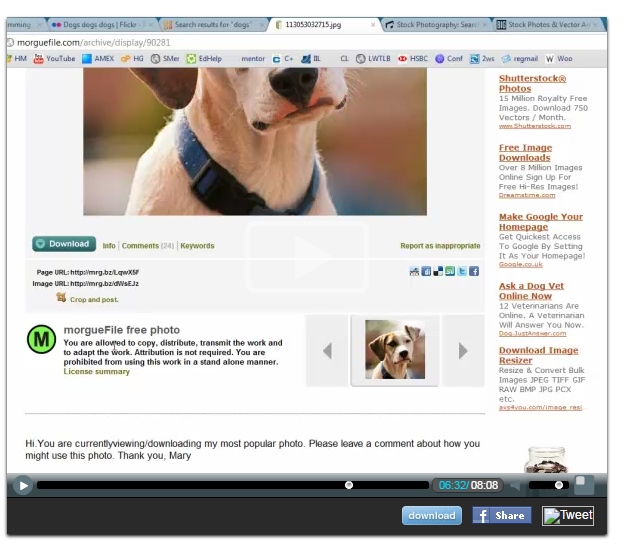 ​In my opinion Gain Higher Ground Membership is the best way for anyone who wants to start their own online business to actually make a success of it.

I started out as a complete novice but with help from Rob - who continues to answer all my queries with both emails and video replies - I actually succeeded!

Now you are probably wondering what I was referring to in the title to this post - the one thing I really don't like about Rob Cornish's Gain Higher Ground Membership so let me tell you.

Rob's videos are so interesting that I have found myself sitting in bed at night, watching them on my iPad until well past my bedtime! Even when I try to sleep I still have ideas floating round in my head.

You can get a trial membership of Gain Higher Ground for just $5. In the unlikely event that you don't like it you can simply cancel it - but I bet you won't!

Everyone has conscious or subconscious ideas that can become limiting beliefs that stop us from achieving our goals if we let them. Sometimes these beliefs are instilled in us in childhood and sometimes we create them ourselves. An example of a limiting belief that can get in your way of success is how you see yourself with money.

If you believe you will always struggle and always be poor, chances are you’ll set yourself up for failure. Your limiting belief that you’re poor and that you always will be poor becomes a self-fulfilling prophecy. The same can be said about anything negative in your life that limits you – whether it’s career, education, or personal such as being healthy and of normal weight. If you see yourself a certain way, it can be hard to change that view and let go of that limiting belief.

There are eight telling phrases that point to a limiting belief:

1. “It’s hopeless” – Anytime you use the word “never” is a clue that you’re focusing on a limiting belief. For example: “I’ll never have any money because you need money to make money.”

2. “I’m helpless” – When most people feel uneducated or helpless, they blame their circumstances instead of working to change them. “I can’t manage my money because I don’t know how” sounds insightful, but the part that’s missing is the feeling of helplessness when all you need to do is take a personal finance course or buy, read and practice the lessons in “Personal Finances for Dummies”.

3. “It’s useless” – The idea that nothing you do will make a difference is that you believe that any action you take won’t make a difference. “It doesn’t matter if I work out an hour a day, I won’t lose weight anyway.” How do you know? Have you tried to do anything for longer than a couple weeks?

4. “It’s the universe” – Sometimes a limiting belief has to do with the idea that outside forces that you can’t control are at work keeping you down. You can’t find a job or get clients because the economy sucks, where you live is depressed, you don’t have the right clothing and so forth, but you do nothing in your power to change it because it’s destiny. “Everything happens for a reason” type of thinking can be very limiting and make you feel powerless.

6. “It’s genetic” – While there are certainly some instances where genetics play a huge role in a person’s life, the truth is that almost everything that is genetic can be fixed with the right mindset, training, exercise, and outlook. You’re not stuck with your genetics, but if you think you are, you may not try any of the things to pull yourself out of the rut you’re stuck in.

7. “I’ll fail” – The truth is the fear of failure is something most people have as a limiting belief. “I’m a bad public speaker so if I do it, I’ll be judged, and I’ll fail anyway so why try” is a common refrain. But, how can you set that belief in stone if you’ve not tried?

If you ever hear any of these phrases go through your head, try to disconnect from them, and turn them around to “why not me” instead of “why me.” Always ask “why not me” because the truth is, you’re not feeling anything different from anyone else who has made goals and achieved them. The difference is in the doing, not the intelligence or talent.

Take Action and make positive difference in your life!

Sorry I haven’t been active much on the blog recently.

I am actually working hard to publish my first book which is called The Productivity Blueprint.

Hopefully it will be out very soon so check back for updates – I think you will enjoy it!